The Dark Side of DC

The theme of justice reoccurs frequently throughout the DC comics. Of course, characters were invented to oppose this theme.

A serial killer, a dangerous villain, a criminal mastermind; The Joker is perhaps Batman's greatest challenge. He taunts Gotham's crusader with the purpose of pushing Batman into killing him. He represents the chaos and anarchy he believes lies in every person. He wants to expose this, despite spending most of his time in Arkham Asylum for the criminally insane. He's dressed as a clown with green hair and is credibly Batman's most popular foe. The Joker was first introduced in Batman #1, Spring 1940, originally written as a goofy trickster-thief. We now know him as a psychopathic killer. 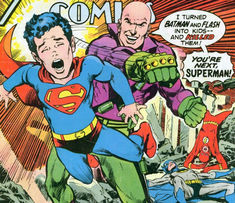 Not only is Luthor incredibly wealthy, intelligent and powerful, but he also has access to the only thing that can destroy Superman - Kryptonite. Later in the story line he decides to use red kryptonite to power his technology. Luthor believes that he could rule the world if he rid it of Superman, because with him people became dependent, vulnerable and small minded. He was first introduced in Action Comics #23, 1940.
Click here for an extended list of DC super villains.
Powered by